One of the most special and most awaited celebrations is the new year’s eve. We are just days away from the event and it is normal to have doubts about what to do and what plan to propose to your family or friends.
With the purpose of enjoying a luxury New Year’s Eve in Barcelona, from Font Real Estate we propose you the most current plans and that can be a good alternative to traditional dinners at family homes.
Cheers to it!

How to celebrate New Year’s Eve in Barcelona?

That you enjoy the end of the year in Barcelona is our priority in this post. That’s why we want to propose several plans to make the most of this special night. 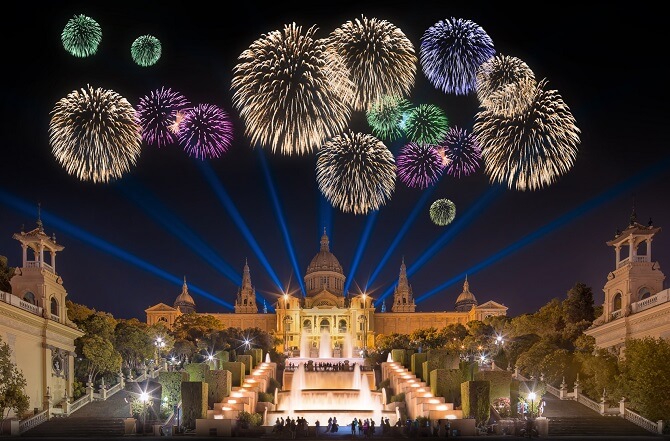 As it has been doing a few years ago, the Montjuïc Fountain is officially hosted in Barcelona to dismiss 2016 and welcome the year 2017.
The event will begin at 11pm and you will be able to enjoy performance and performing arts in the show that the city has prepared to brighten the atmosphere among all those attending the event.
A few seconds from 00h, the 12 bell strokes will take place. It is at that moment when the entrance to the new year is celebrated eating the 12 grapes of luck. And just as they finish, the pyrotechnic show will start with fireworks that will illuminate Barcelona’s sky of different colors.
How to get there: Plaza Carles Buïgas (Montjuïc Fountain).
When: 10:30 a.m. to 6:30 p.m.
Metro: Espanya stop. Line 1 and 3.

2. Celebrate new year in one of the luxury hotels of Barcelona.

Another option for the night of December 31th, is to celebrate New Year’s Eve in one of the hotels in Barcelona. Most luxury hotels in the city organize special dinners at the end of the year and enable their rooms to host the party after eat the 12 graps.
Shows, dance, cocktails …. a good choice for all the family and friends to celebrate a different night.
Also, you have the option of staying in the same hotels after the party for convenience.
Hotels such as Hotel Arts, W Hotel, Ohla hotel or Princess Barcelona among others will open their doors on this special night.

3. The party of New Year in discos and nightclubs.

You will not miss an offer to celebrate New Year’s Eve in Barcelona. Many of the nightclubs and discos of the city join in celebrating after the bells, a new year party.
We recommend buying an early ticket because during the night of December 31th, Barcelona is more alive than ever and it will be difficult to access any of these parties without the previous purchase of the ticket.
Although, one of the most emblematic and beautiful paties is the one that is celebrated in Poble Espanyol. A space with great capacity where to celebrate the entrance to the new year 2017.

Do you know where you are going to celebrate New Year’s Eve in Barcelona?
So do not forget the twelve grapes of luck at the time of the bells, brand new red lingerie that night, cheers with a ring inside the champagne and write a list of wishes and purposes for the new year. All superstition is too short for this new year to be much better than the previous ones.